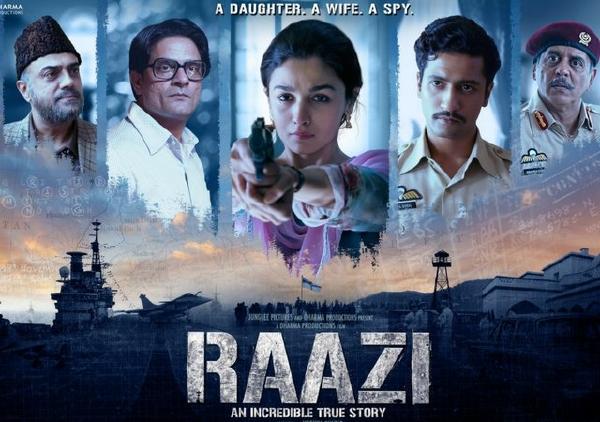 Alia Bhatt is back! Yes! After having break since her last release ‘Badrinath Ki Dulhania’, Alia Bhatt will be seen sizzling on a silver screen in one of the most powerful performances in an espionage thriller, ‘Raazi. After its trailer release, the audience is eagerly waiting to see Alia Bhatt in a whole new avatar.

Raazi revolves around a story of Sehmat, played by Alia, who purposely crossed the border in 1971 as an Indian spy and then she got married to a Pakistani military officer Iqbal to grab classified information. Originally, the movie is based on the novel ‘Calling Sehmat’, which depicts a thrilling saga of an Indian spy, from Kashmir who sacrifices her entire life for serving nation.

As per trailer, the movie is not just going to be about Indo-Pak war, but it will much more than that. It will be about an individual commitment. It will be about a time of high-octane feud between two nations during 1971. Accroding to Meghna Gulzar, the director of Raazi, this movie is not intended to degrade or glorify any of these nations! It is neither about a hero-villain saga. It is about sheer duty aimed at safeguarding one’s country.

Interestingly, Alia’s mother and a vetertan actress, Soni Razdan will also be playing her on-screen mother in this movie. And for the first time, both Vicky Kaushal and Alia Bhatt will be seen opposite each other.

Slated to release on May 11, the movie is helmed by Meghna Gulzar and produced by Vineet Jain, Karan Johar, Hiroo Johar and Apoorva Mehta and co-produced by Priti Shahani.
Book your tickets at your nearest Rajhans Cinemas and enjoy Alia Bhatt’s would-be ambitious performance in this period thriller film.