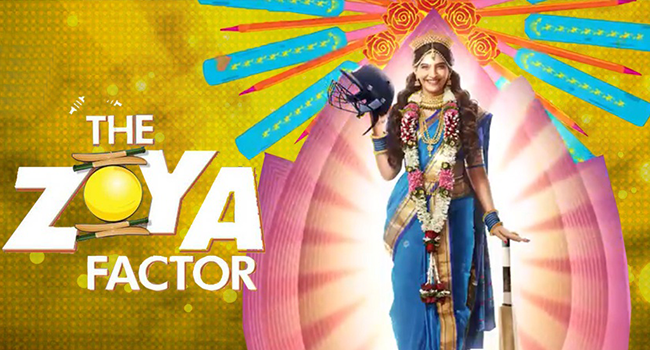 Sonam Kapoor is all set to take her fans on an interesting ride through her upcoming movie titled, ‘The Zoya Factor’. After making both the cricket fans as well as her fans awaiting as “India’s lucky charm”, the movie-makers released a new poster of Sonam donning a goddess-like saree along with adorable ornaments. This poster has no doubt, grabbed the eyeballs of the fans. What’s more, a bat and a cricket helmet in her hands surely gives a surprising stroke!

Not only its posters, the trailer of The Zoya Factor was also admired by the fans and celebrities like Kohli and Tendulkar. So what this movie has to do with cricket? Yes! it is based on one of the bestselling novels of the same title by Anuja Chauhan. In this movie, Sonam will be seen playing a role of an advertising executive while Dulquer Salmaan plays the Indian cricket team captain as Nikhil Khoda.

What a coincidence it was when Zoya was born! It was the day of 25th June, 1983 when India won its first world cup. And this is the reason why her father considers her a lucky charm saying, ‘This girl’s luck will make her world famous one day’. Unfortunately, in the reality she can be seen struggling in her own personal affair irrespective of her lady luck in the game of cricket.

There will be so much hair-raising moments in the middle of the match as she will be the right lady-luck till the last bowl is bowled! Things will change as soon as she is to take up a project for the Indian cricket squad. Not only her, almost everyone is enlightened by her divine powers which leads her to be a nationwide sensation dubbed, ‘India’s secret weapon’.

This movie is directed by Abhishek Sharma, who has previously helmed films like Parmanu: The Story of Pokhran (2018) and Tere Bin Laden (2010). Book your tickets at your nearest Rajhans Cinemas and witness a story about a girl who is considered too lucky for the Indian cricket team!