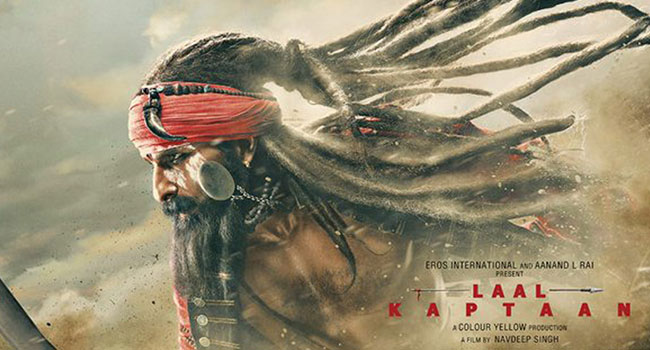 The makers of ‘Laal Kaptaan’ have been unveiling the trailers of the film in parts. If you remember, the very first part of the trailer gave us a glimpse of Saif Ali Khan’s rough and bewildering avatar and how he goes vengeance-spree against his foes. The second trailer titled ‘The Chase’ introduces yet another character essayed by Deepak Dobriyal who has the power to track down any humans or animals by merely following their scents. He is the one who has already enthralled the audience with his role in Tanu Weds Manu Returns.

There will also be a special appearance of Sonakshi Sinha as spotted in red veiled attire in a trailer. Zoya Hussain is also seen in an intense avatar accompanying Saif on his journey.

Set in a tumultuous time of Indian history,‘Laal Kaptaan revolves around the life of Naga Sadhu played by Saif Ali Khan, who has set on a dramatic journey filled with revenge and intense deceit. The movie is said to have set 25 years after the Battle of Buxar in the late 18th century. The movie follows a militant Naga Sadhu, a mercenary for hire who is bloodthirsty for a 20-year-old revenge.

Written and directed by Navdeep Singh, this action drama surely promises a gripping visual treat which is set in a larger-than-life environment with dramatic cast and interesting narrative. Moreover, the dialogues in this movie are written by Sudip Sharma. Produced by Eros International and Colour Yellow Production, this movie is scheduled to release on 18th October.

Saif Ali Khan plays a never-seen-before character in the movie and there has been much anticipation building up. Book your tickets at Rajhans Cinemas and enjoy this period action drama ridden with profuse deceit and vengeance.