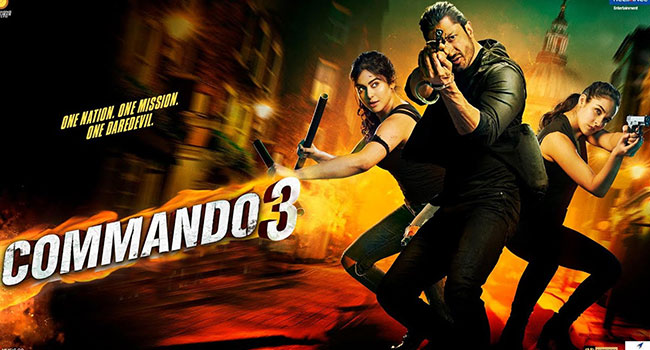 The trailer of Vidyut Jammwal’s Commando 3 has garnered awesome attention. In the trailer, he is seen in the role of Commando Karanveer Singh Dogra. He, along with his teammates Angira Dhar and Adah Sharma sets out on a mission to nab a terrorist who is due to incite civil war in the nation. The role of an antagonist is played by Gulshan Devaiah.
The trailer of Commando 3 starts with Gulshan’s evil character saying, “Hindustan royega, khoon ke aansu royega. There will be a civil war, main rahu ya na rahu.” Then Vidyut’s character makes a riveting entry, a sturdy commando, who has been appointed to stop Gulshan for his wicked intentions.
After watching the trailer, it is obvious that the violence in ‘Commando 3’ is brutal, and of course, graphic in some scenes. It will definitely take some nerve to sit through those scenes. So, get ready for some heavy-duty action, with raw hand-to-hand combat and deadly chases. Surprisingly, Commando Karanveer Singh Dogra will score on every action scene, taking it to the next level — with his robust punches, back flips and fatal kicks– it’s going to be undoubtedly a surefire adrenaline extravaganza.

Vidyut will surely steal the show as the daredevil who can stun the spectators. There will be a patriotic fervour to capture almost every key scene in the movie, but what will manage to hold your eyeballs is the tactics that Vidyut Jammwal is going to add to every scene with his high-octane action par excellence.

Commando 3 is the sequel of the 2017 franchise Commando 2: The Black Money Trail, which also starred Vidyut in the lead role. Commando: A One Man Army, the very first film of the franchise, was released back in 2013.

Book your tickets at your nearest Rajhans Cinemas and witness a man on a mission to wipe out the evils that pose a threat to the nation.