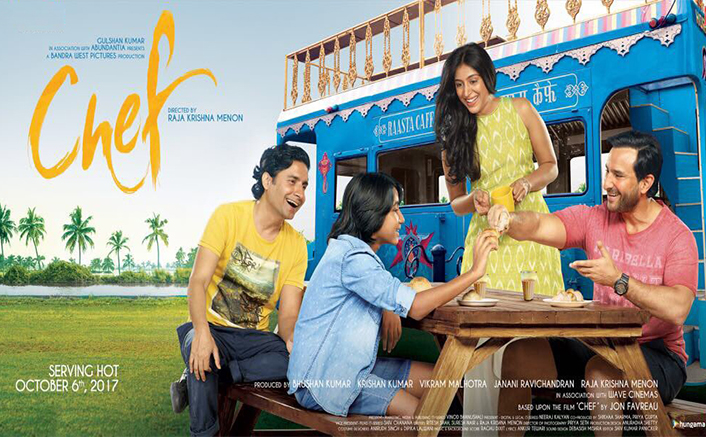 After a little long parental leave, Saif Ali Khan is all geared up for his fresh release this year. The trailer of his imminent and much-awaited movie ‘Chef’ was released which was really appreciated by the audience . But hang on! This flick is an Indian adaptation of American comedy drama hit, ‘Chef’ which was released in 2014, directed, written and produced by Jon Favreau. Surprisingly, this Bollywood addition comes with the same name, ‘Chef’!

We had already witnessed Saif Ali Khan making most of his culinary magic in ‘Salaam Namaste’ with his on-screen which did create his aura in the kitchen area. This two-and-a-half minute trailer shows a father patching up his relationship with his adorable son. The bittersweet tales of their bond illustrates a heart-melting storyline that’s bound to leave you touched.

Likewise, the original Hollywood film, this remake focuses upon an otherwise ambitious chef Roshan Kalra (Saif Ali Khan) who barges in food-fueled road trip as his new career option with his son. After their journey ends, the dio are seen serving food out of a double-decker bus to a gaggle of hungry people. Overall, their journey is expected to arise more interest as well as hunger to relish this food-centric drama.

In fact, the remake of ‘Chef’ was announced two years ago to the director Mr. Jon Favreau which he replied saying that he was really excited to see how his famous film could translate into very Indian culture and similarly expressed his hope that such theme revolving around family, food and music should make an impact.

After analyzing the trailer of this movie, it shows a lot more potentials for humour-laden scenes coupled with heart-touching moments between the son and father.

All in all, this movie is directed by Raja Krishna Menon of ‘Airlift’ which is scheduled to be released on  October 6, 2017.

Book your tickets at your nearest Rajhans Cinemas and enjoy this food-fueled father-son drama by savouring on your favourite snacks.