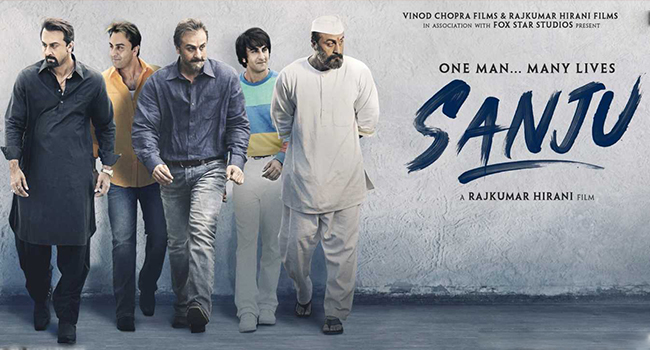 Lately, Bollywood is setting out on biopics one by one. Though there are many more of them lined-up to hit the screen, there is one which is being immensely awaited , ‘Sanju’. In this Rajkumar Hirani’s biopic, Ranbir Kapoor will be playing a titular role. Given the fact that actor Sanjay Dutt has been one of the most loved as well as controversial actors, the movie on his life will indeed make up for a wonderful watch.
As you may know Bollywood actor Sanjay Dutt’s life has been a roller-coaster ride, it has quite a many highs and lows. And thus, there was tons of excitement when acclaimed director Rajkumar Hirani announced a film on the Sanjay Dutt’s life. Add to more, when Ranbir Kapoor was announced to play this biopic, the excitement truly surpassed!
Let’s check out some of the interesting facts about this highly-anticipated movie!
More than Biopic

To our surprise, Sanju is more of a father-son story than a mere biography. And Paresh Rawal lays the role of Sanjay’s father Sunil Dutt in the film.

Romance is just secondary.
The movie will not focus upon rumoured affairs of the Munnabhai as the director didn’t wish the movie to be about gossip. “We keep telling wrong choices make good stories and the character of Sanju is the fitting example”, Hirani added.
A film within film
As we know that the Munna Bhai series is a turning point for Sanjay Dutt’s career, reenacting Munna Bhai scenes with Ranbir will be amazing experience. Since Munna Bhai  M.B.B.S is the only film where Sanjay Dutt and Sunil Dutt worked together, the scene from this movie will surely sketch out the bond between the duo.

Ranbir or Ranveer?
Lately, it was learnt that producer Vidhu Vinod Chopra wanted the Padmavat antagonist Ranveer Singh to essay the role of Sanjay Dutt for Sanju because he believed that Ranveer has excellently rakish with an emotional depth to transform himself into Sanjay Dutt. But it was Rajkumar Hirani’s idea to cast Ranbir Kapoor and for this decision the producer was not happy, initially. It was only after witnessing Ranbir’s stunning performance which made Vidhu Vinod Chopra well-pleased !

More to Star!
Yet another still from Sanju featuring Karishma Tanna and Vicky Kaushal on a dancing floor have left the fans spellbound. Karishma Tanna is seen playing Madhuri Dixit and Vicky Kaushal will be essaying the role of Sanjay Dutt’s best friend on screen. Songs such as ‘Kar Har Maidaan Fateh’ and ‘Main Badhiya Tu Bhi Badhiya’ have already become hit and the next dance number will add more surprises!

Whats in there?
Sanju will feature Sanjay’s drugs struggle and the regretful gun episode of his life. Moreover, there will also be other stories in the backdrop so as to give almost all highlights in Sanjay Dutt’s life.

Helmed by the director Rajkumar Hirani, the movie is all set to hit the theatres on 29 June. The movie also stars Anushka Sharma, Dia Mirza, Manisha Koirala, Sonam Kapoor, Paresh Rawal and Vicky Kaushal to name a few.

Book your tickets at your nearest Rajhans Cinemas and enjoy this highly-anticipated biopic.