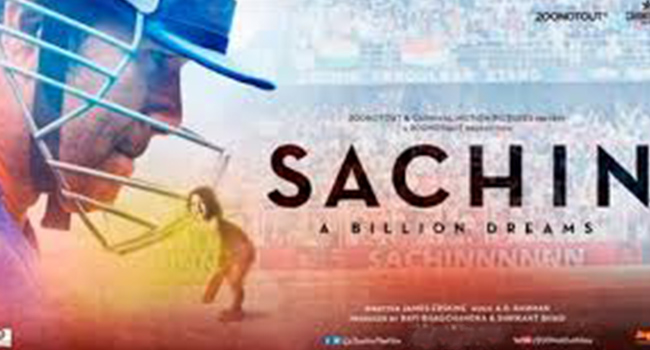 Recently, we’ve seen two movies made on our cricket legends’ lives, ‘Azhar’ and ‘M.S. Dhoni : The Untold Story’. Both of these roles were aptly played by Emraan Hashmi and Sushant Singh Rajput , respectively. But how could the cricket stories be completed without the God of Cricket, Sachin?

Yes! The most-awaited sports biopic, Sachin : A Billion Dreams’ is releasing on 26th May 2017.

The way he tried to get into cricket as a pace bowler only to become a Master Blaster Sachin Tendulkar. His journey is awesome that the cricket-fans would love to see, over and again. Before you witness this highly anticipated movie, let’s check out why this biopic is special treat for every cricket-fan from across the globe.

Surprisingly, the name of the film was chosen via Twitter contest announced by Sachin Tendulkar.

The biopic is directed by London based Emmy – nominated director, James Erskin who is known to have directed famous movies such as Pantani: The Accidental Death of a Cyclist (2014) and Shooting for Socrates(2014) and  EMR (2004), to name a few.

The music for this movie is composed by veteran Oscar-winning composer A R Rahman.

Who could have played the role of young Tendulkar better than Arjun. Yes! His son is playing a young Sachin only to show perfect gestures and mannerism like that of his father.

Apart from Sachin, there would be many scenes wherein other cricket icon are featured in real footage as this will be the perfect opportunity to reminisce the cricket fraternity.

There will be some scenes that are actually shot at Sachin’s Bandra residence.

The philanthropist Sachin has not charged any fees for his biopic. In fact, the lead role is played by Sachin himself.

BCCI has refused to give footage of Sachin Tendulkar’s significant visuals, at a discount for this biopic to the production company behind Sachin: A Billion Dreams.

The Master Blaster has himself shared many details about him. This is not just a movie but it’s an epic journey of one of the nation’s most-loved cricketers who has made the entire mother India proud of him.

Slated to be released on 26 May 2017, the movie is produced by Sachin’s friend Ravi Bhagchandka and the Master Blaster gave each and every details of him very politely and gently.

Don’t miss to be a part of the roaring crowd cheering in the greatness of Sachin Tendulkar only at Rajhans Cinemas.