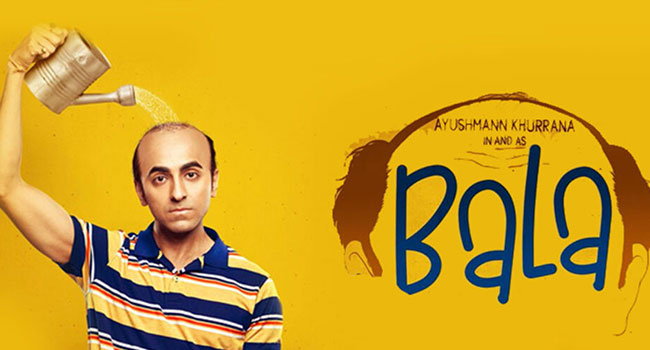 Ayushmann Khurrana is famous for his selection of movies as they mostly carry a social message besides being utterly entertaining and engrossing. Now the National Award-winning actor will be seen in a yet another completely different avatar.

They say good things come in pairs and lately, it seems very much obvious when it comes to Bollywood. Yes! There are films on male baldness. Just after the release of Ujda Chaman, Ayushmann Khurrana is also coming up with the vexed issue of baldness in his unique verve. We can say that not only the balding people but also Bollywood is taking hair loss problem a bit too seriously.
Directed by Amar Kaushik of ‘Stree’ fame, the movie also stars Bhumi Pednekar and Yami Gautam. In the trailer, the makers have introduced Ayushmann’s character who is facing premature balding problem and is working out best to regrow his hair in a desperate bid to get a beautiful lady for marriage.

Believe it or not, once again the actor Ayushmann Khurrana has chosen film with solid content. Apart from balding Ayushmann , there will be Bhumi Pednekar who will be essaying the role of a dusky small-town girl at odds with a society which is seriously obsessed with fair skin. As we know, Ayushmann’s recent films, Dream Girl and Article 15 were massive hits, we can assume that this movie too, will meet the expectation backed up by interesting story-line.
For sure, the film is expected to be the fun and quality entertainer of the year. So why wait? Just book your tickets at your nearest Rajhans Cinemas as‘Bala’ looks like the third straight success of the year 2019 under Ayushmann Khurrana’s belt.

Bala, starring Ayushmann Khurrana, Yami Gautam and Bhumi Pednekar and directed by Stree director Amar Kaushik, was to hit screens a week later, on November 15. But then the problems began as Bala got preponed by a week. Its producers, in fact, decided to arrive with the film on Thursday November 7, a day before Ujda Chaman hit screens.