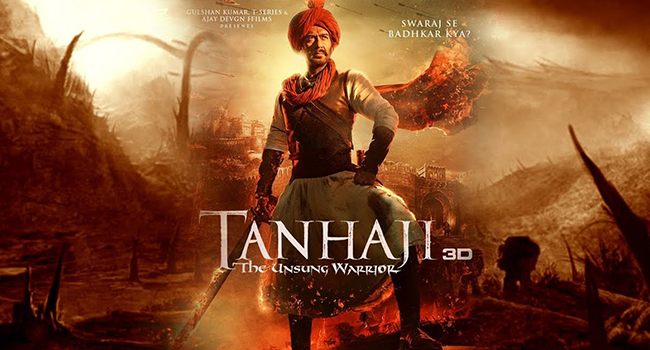 First and foremost, Ajay Devgn’s upcoming film on Maratha warrior Tanaji Malusare, Taanaji: The Unsung Warrior, will now be called Tanhaji. According to a report in a film magazine, the film’s name has been changed due to numerological reasons.

Ajay Devgn is super excited for this movie which also marks his century in Bollywood. The trailer and the songs of the movie have received a positive response from the audiences and the historic drama is, so far, making a buzz.

In a trailer, we can witness the valour and bravery of a maratha warrior Tanaji played by Ajay Devgan. He is seen jumping and descending through what looks like a gorge in the mountains with the help of thick ropes. Dressed in white dhoti, pagdi and armour with his face half covered, Ajay Devgan is all geared up for a clash in order to protect the motherland.

So who was this Maratha lion and why his tale needs to be sung? Yes! He was worthy of praise for his commendable sacrifice and bravery that shook the Mughals. Taanaji was a Sardar (military commander) in Shivaji’s army and was the architect of Maratha victory in the Battle of Sinhagad in 1670. This victory is significant in Indian history as it was instrumental in the resurgence of Shivaji’s military campaign after the ruler had suffered a few setbacks and lost 23 forts to the Mughals in the 1660s. The victory was among the first of Shivaji’s offensives in a bid to reconquer his territory that led to the establishment of the Maratha Empire in 1674.

Book your tickets at your nearest Rajhans Cinemas and get ready to witness the Battle of Sinhagad and of course, the true warrior Tanaji who was martyred in this battle.