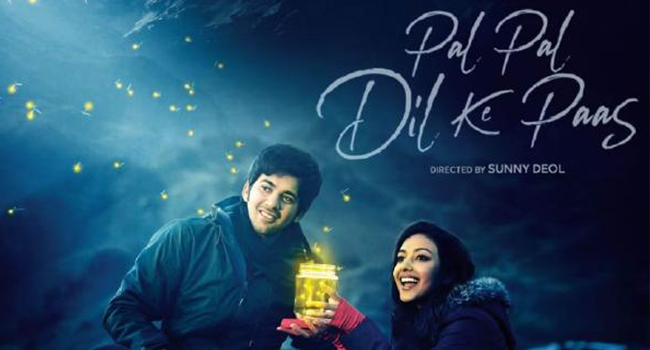 Sunny Deol’s son Mr. Karan Deol is making his Bollywood debut with a romantic drama Pal Pal Dil Ke Paas. Surprisingly, this movie marks a first debut for Sunny Deol too as it is his very first movie as a director. Ever since the first look of the poster popped up, the star kid has been compared to his father Sunny Deol, who also made his Bollywood debut with a romantic drama Betaab.
While it is clear that Junior Deol will surely have to brave comparisons with his father, who has a long list of successful movies to his credit, we can make out some similarities between the duo.
After seeing the trailer, it is quite visible that this movie is loaded with love story. The protagonist, Karan plays the role of Karan Sehgal who is an adventure guide for the adrenaline junkies. As you know that even Sunny Deol’s character name in his first movie was Sunny itself, so there seems to be a little coincidence between them.
Produced by Sunny Sounds Pvt Ltd and Zee Studios, Pal Pal Dil Ke Paas will surely reminisce the essence of first love. According to reports Sunny Deol, the director has not left any stone unturned in making this movie and it is also reportedly said that he auditioned around 400 girls for the female lead character and signed a charming girl Sahher Bambba.
The Deols are one of the most respected families of the Bollywood industry and they have no doubt, garnered huge fan following over the decades. Now here comes the third generation of Deol clan, the handsome Karan Deol who is all set to begin the first big screen performance!
There will be so many adventurous journeys in this movie and of course, it will be interesting to see how the love blooms among the hefty mountains, large meadows and rippling rivers. Such a romantic rendezvous there will be!
The film is scheduled for release on September 20, 2019, so book your tickets at your nearest Rajhans Cinemas to enjoy a love-story at its best.