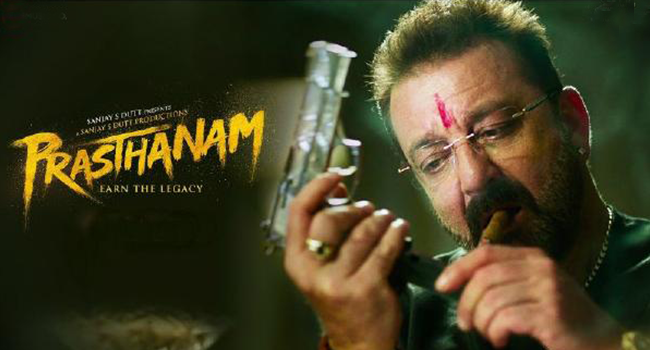 After seeing the trailer of Sanjay Dutt’s Prassthanam, we can add that the war for legacy comes loaded with a lot of twists and actions. Prassthanam is the official remake of the Telugu movie of the same name starring Sanjay Dutt, Chunky Panday, Amyra Dastur, Ali Fazal and Jackie Shroff.
In the trailer a child is seen asking Sanjay Dutt aka Baldev Pratap Singh why Rama killed Ravana and later on it shows Sanjay Dutt fighting goons. The head of a political family is none other than Baldev Pratap Singh and he has two sons (essayed by Satyajeet Dubey and Ali Fazal). There seem a family feud in a bid to win over the legacy. Jackie Shroff aka Inspector Raghav plays an aide of Baldev Singh who is seen supporting him throughout the political war.
Chunky Panday is a main antagonist as Kaali who will take on head-to-head political war with Baldev Singh along with glimpses of Manisha Koirala, Satyajeet Dubey, Amyra Dastur and Ali Fazal.
Overall, it is quite clear that the plot of Prasthanam touched upon the Ramayana and the Mahabharata to delineate the choice of battle between what is right and what is wrong!

In this political action drama, there will be a heinous battle within the family itself wherein good and evil in our souls battle like day and night in a day`s cycle. The incessant battle is Prassthanam is set in a contemporary political family. The movie will also deal with abstract questions on dharma, greed, morality, desire and truth along with politics at grass root levels that takes place in villages of India; which is infested with corrupt political system and not to mention connection between politicians and businessmen.

According to sources, Sanju Baba showed his interest in the Telugu movies. After he was released from the prison, he approached the director of the original film Deva Katta, who then gave a nod in the project due to Dutt’s intensity of interest. Moreover, the director stated that the team Prassthanam has not made any significant changes from the Telugu version and the movie will mark Deva Katta’s first Bollywood film as a director.

Book your tickets at Rajhans Cinemas for Sanjay Dutt’s such a politically-inspired ambitious project.