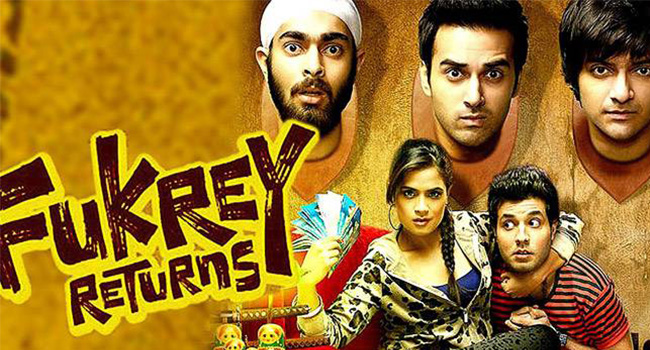 Fukrey proved to be one of the biggest hits in 2013. All the Fukras tickled our funny bones by giving a laughter-filled dose. With its humorous punch lines and awesome presence of comedy, Fukrey was really an enjoyable movie with its brilliant caste i.e Pulkit Samrat as Hunny, Varun Sharma as Choocha, Ali Fazal as a struggling musician Zafar,

Richa Chadda as Bholi Punjaban and Manjot Singh as Lali.

After Fukrey many comedy flicks have been released during last three years, however the impact of this comedy extravaganza has still left us in its magic. Believe it or not, the one movie that could have grappled with Fukrey is its sequel, ‘Fukrey Returns’. After achieving great success, the Fukrey team is all set to comeback with the second installment – Fukrey Returns. In fact, the very first poster of this movie created a wave of interest among the audience to welcome this gang, once again.

The trailer of this movie added excitement and recharged the audience with the Fukrey fervour. It starts with a reminder of the first movie, wherein Delhi University aspirants get entangled in a tight corner. Here comes a fresh comeback with the same old crazy chaps who’re all geared up for their personal yearnings i.e Hunny wants to be lucky enough with his girl and not to mention Bholi Punjaban who is on her way to revenge.  Just released from Jail, she influences the whole gang to partake in a betting hoax, based on Choocha’s augury. Interestingly, this time he assures to take this ability to the next level and claims to see the future. He predicts a cave where exist buried treasure which is being protected by a tiger and demon.

Not only the plot and its crazy characters but the songs like ‘Mehbooba’, Ishq De Fanniyar’ and ‘Pej Gaya Khalara’ have further added excitements among audiences. Moreover, the makers of this movie have gone out-of-the-box by visiting famous Fukra venues in Delhi and Mumbai.

Directed by Mrighdeep Singh Lamba, Fukrey Returns is co-produced by Ritesh Sidhwani and Farhan Akhtar under the banner of Excel Entertainment which is all set to release on 8th December.

Book your tickets at your nearest Rajhans Cinemas and watch out the Fukrey gangs with all the more fun and excitement.