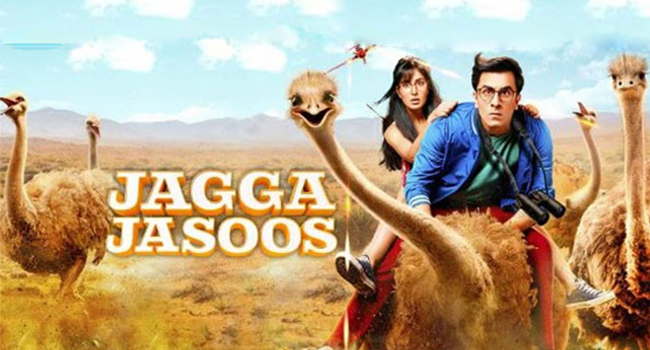 Finally! The Ranbir-Katrina starrer ‘Jagga Jasoos’, is hitting the theater. And there’s also Adah Sharma in lead role. Of course, it is an extraordinary treat to watch. Ranbir stammers and that’s why he has to talk by singing so that he can’t stop! Very melodious though! Fun-filled setting, lots of chase and fight sequences and very wonderful animals’ sequences being depicted around i.e getting a hitch on ostrich to falling prey to cheetah!

Ranbir is seen playful, singing, dancing and emotional. The story is about a young boy-turned-detective Ranbir who is in search of his missing father. And there Ranbir along with Katrina take up a journey with loads of entertainment.

According to reports, it has been claimed that this movie has some similarities with Tintin but Ranbir has refused it, saying ‘Jagga Jasoos’ is an original story. The director Anurag Basu was also in much talks during Barfi wherein it was claimed that the director had taken some references from Charlie Chaplin’s film ‘The Adventurer and The Notebook.’

Fortunately, the releasing date for Jagga Jasoos is nearing. This movie in particular, has seen many scheduling and rescheduling as it was delayed quite often. And what better reason for this can be than their break-up in recent past? Yes! According to sources the pair had some chemistry issue off-screen but they skilfully sorted it out and gave a riveting performance on-screen.

Surprisingly, the main USP of this movie Jagga Jasoos is its songs such as Ullu ka Pathha, Galti se mistake & Jhumritalaiya that have already created great buzz among fans. The way Ranbir has shook his leg in these songs has completely influenced everyone to get one’s groove on! To our surprise, this movie is said to be featuring more than 20 songs as it being a musical drama.

‘Jagga Jasoos’ will definitely be loved by audiences as acting-nazi Ranbir will steal our hearts. Besides, extraordinary comedy dose, sizzling chemistry between Katrina and Ranbir will surely take us back to the days of Ajab Prem Ki Ghazab Kahani!