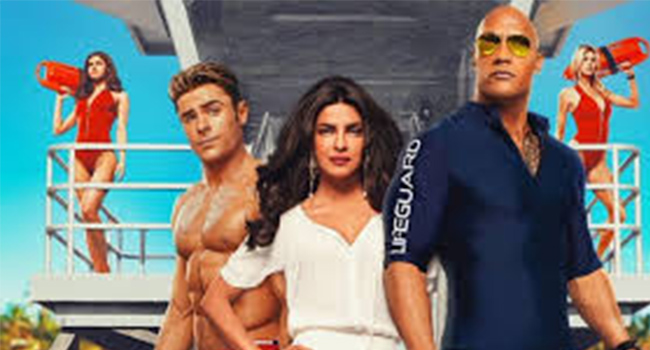 Ever since Priyanka Chopra’s Hollywood debut was confirmed in Baywatch, the fans across India have been eagerly waiting to watch it. However, the movie is not released in India yet, the critics from abroad have praised this movie as it was released on 25th May. The film stars all-time favourite hardy hunk Dwayne ‘The Rock’ Johnson, Alexandra Daddario, Zac Efron and raven-hair beauty Priyanka Chopra as an antagonist.

Directed by Seth Gordon, Baywatch is about a hard-working lifeguard Mitch Buchannon (Rock) as he encounters with a new recruit (Efron). But this doesn’t end here as they give their best to expose a local criminal plot which is undoubtedly harmful for the future of the Bay. Eventually, Brody, a bad-boy too joins their team along with fellow trainees and together they dive into a mission to keep the Bay safe.

Major shots are taken on Deerfield Beach in Florida as the setting of this movie is based in Broward County, Florida. However, there several other scenes that are shot in Savannah, Miami and Georgia. Interestingly, the original TV series of Baywatch was shot in Malibu, California.

Since Baywatch being the first Hollywood movie debut of Priyanka, fans in India are eagerly waiting to watch the star’s performance. She is really making the whole India proud of her. Not only she has attended the most prestigious Oscar Award ceremony but also has been doing an American TV series and this time in Baywatch, playing a baddie. With such a mammoth success under her belt, she has become an international youth icon having more than 13 million followers on Instagram.

Baywatch will be hitting Indian theatres on June 2, 2017 and fans are going gaga over her first Hollywood debut.

Book your tickets at Rajhans Cinemas to witness PeeCee in all the more new avatar.