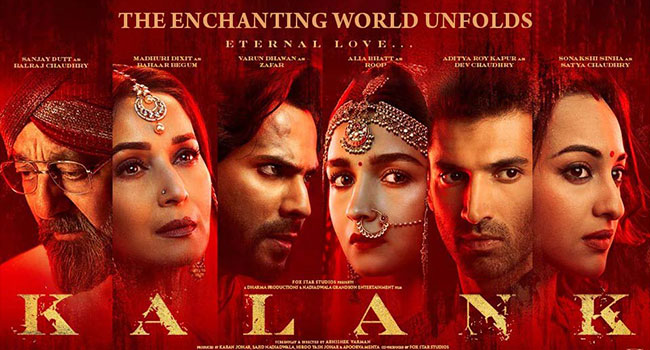 Karan Johar’s multi starrer ‘Kalank’ has been in the limelight ever since the announcement of the cast. No doubt, ‘Kalank’ is one of Bollywood’s most awaited movies of 2019 because of its star-cast . As you know this movie stars some of famed actors such as Alia Bhatt, Varun Dhawan, Madhuri Dixit, Sonakshi Sinha, Sanjay Dutt and Aditya Roy Kapoor, it will surely make a big bash.

Here are some of the interesting facts that you would love to know before you watch this movie!

The plot of Kalank was conceptualised by Yash Johar along with his son and producer of the film, Karan Johar almost 15 years ago!

Late actress Sridevi had been initially signed up to play the role of courtesan Ishmat in Kalank. Unfortunately, due to her sudden demise, the role will be played by Madhuri Dixit.

With a brilliant director and notable producers backing this movie, and not to mention its envy-inducing star cast, it’s time to hurry up and book your tickets in advance at your nearest Rajhans Cinemas!