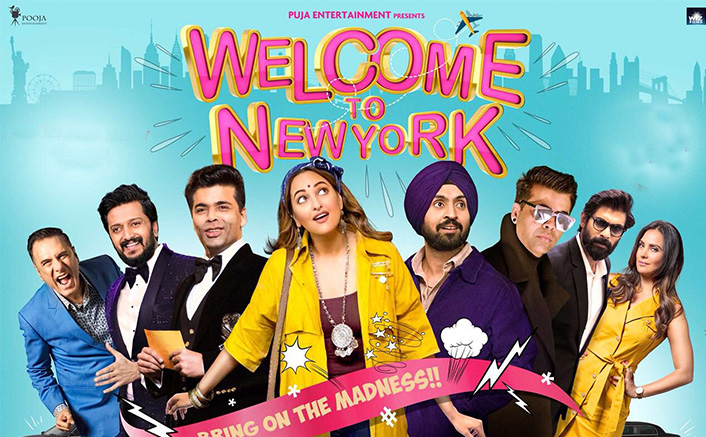 Yes! You guessed it right after seeing the trailer! In fact, it’s going to be a full-family entertainer loaded with whacky comedy. Hang on! ‘Welcome to New York’ is not just a run-of-the-mill comedy film, but cheer up as it’s going to be India’s first 3D comedy movie. On the top of this, the movie boasts biggest ensemble cast featuring Salman Khan, Rana Daggubati and Katrina Kaif among others.

Intrestingly, this movie will present a special treat for the fans of Salman and Sonakshi. The duo who made their fans swoon over with their on-screen chemistry in Dabangg series, are once again back in a special song. The very news regarding this song which is voiced by Payal Dev and composed by Sajid Wajid has in fact spread a winsome charm coupled with comedy and romance.

This rib-tickling comedy features not only a list of stars but also re-enacts some famous dialogues from movies like Sholay, Karan-Arjun and Bahubali among others. In addition to this, ‘Welcome to New York’ acts as a satire to sevaral cinematic incidents of Bollywood which will brilliantly be presented by the hosts of an event, KaJo and Riteish Deshmukh. The conversation between Sushant and Diljit regarding M.S Dhoni- The Untold Story is really hilarious as depicted in the trailer. Moreover, this doesn’t end here and there are several other starcasts who will be seen portraying epic dialogues which is sure to give the viewers a belly laugh.

Welcome To New York is about two youngsters from India who are in search of a better life for themselves. To their surprise, an unexpected trip to New York changes their life forever. And this journey is going to be a total fun for the viewers, beyond doubt.

Produced by Wiz Films and Pooja Films, and directed by Chakri Toleti, ‘Welcome To New York’ is scheduled to release on 23rd February. Book your tickets at your nearest Rajhans Cinemas and enjoy this comedy dose equiped with 3D wonder for the first time in Bollywood!