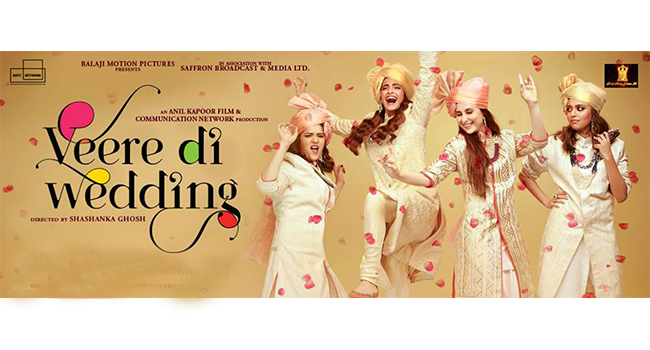 ‘Veere Di Wedding’ has been generating buzz ever since the cast was revealed. Yes! Kareena Kapoor Khan is all set to mark her comeback post Taimur’s birth. And not to mention. Directed by Shashanka Ghosh, ‘Veere Di Wedding’ also stars Swara Bhaskar, Shikha Talsania and Sonam Kapoor. Moreover, Sumeet Vyas of web series ‘Permanent Roommates’ fame, will be starred opposite Kareena. ‘Veere Di Wedding’ marks Rhea Kapoor’s second endeavour in the chick flick genre of Bollywood. It is revealed that this movie was extensively shot in Delhi followed by a couple of sequences in Bangkok.

Being one of the highly anticipated movies of 2018 with a talented ensemble of all-female cast, this film is in everyone’s watchlist, beyond doubt. Besides its remarkable stars and interesting storyline which is about Kalindi’s (Kareena) wedding, fans are also eagerly awaiting to see fresh pairing of Kareena and Sumeet Vyas.

The story of this movie revolves around four childhood friends Avni (Sonam kapoor), Kalindi (Kareena Kapoor), Sakshi (Swara Bhaskar) and Meera (ShikhaTalsania). After a decade when these four pals meet, they scarcely realise how much life has changed actuallty from what they expected once for all! The movie is set against the backdrop of Delhi, where these girls are brought up facing the tribulations of modern-day world regarding marriage, family acceptance and societal perceptions.

Amid all these situations, the movie portrays Kareena’s role of a to-be-bride and her girlfriends who are invited to attend the marriage ceremony. According to sources, this movie is aimed at elaborating marriage merriment from a women’s perspective and so, promises to be emotional as well as entertaining- just like real-life nuptial.

Get ready to watch girl power spreading across the theatres on June 1 as Kareena Kapoor Khan and her Veere’s, Shikha Talsania, Swara Bhasker and Sonam Kapoor are all ready to set the screen on fire with ‘Veere Di Wedding’.

Book your tickets at your nearest Rajhans Cinemas and witness the most stupendous wedding extravaganza of the season.