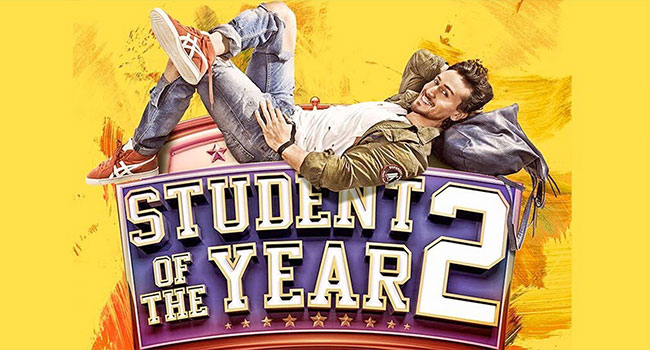 Action-packed, a lot more dance moves and love stories! Yes! It’s time to welcome Student of The Year 2. And this student is going to be a bit rough and stylishly impressive. He’s none other than Tiger who shakes a leg as extraordinarily as he strikes with it.

The sequel to Karan Johar’s campus drama ‘Student Of The Year’ (2012) has been in the news ever since the trailer has been announced. Of course, the year 2012 was the graduation year of Alia Bhatt, Varun Dhawan and Siddharth Malhotra and now it’s time for Tiger Shroff, Ananya Panday and Tara Sutaria to get their degrees. So get ready to make way for the batch of 2019, as the students are back to college for another exciting year and to our surprise Tiger Shroff playing Rohan will be seen as a visually-challenged guy! Really, intriguing it will be, won’t it?

The trailer of Student Of The Year 2 has been appreciated by fans. It rightly promises a story brimming with high school drama, hair-raising fights, perplexing love triangles and lots of dancing elements. In the trailer, Tiger Shroff is brutally beaten and taunted by his opponents in the Dignity Cup competition. Following such an insult, he trains himself for the competition. And he does seem coming back with toned torso and bulging biceps to beat his opponents.

What’s more here we meet two lovely actors who are making their Bollywood debut i.e Mia, played by Tara Sutaria, who is Rohan’s #1 fan and Shreya, played by Ananya Pandey, who is Rohan’s nemesis-turned-admirer. Clearly, this movie is all about teens and young adults, who tend to be more impressionable than they realise, wherein issues like first love, bullying and peer pressure are on rife.

Further to your surprise is Hollywood star Will Smith! Yes! He will be seen shaking a leg with ‘Student of the Year 2’ actors Tiger Shroff, Tara Sutaria and Ananya Panday in the film. Hence, this movie has so much to offer to the fans of ‘Student of the Year’ franchise.

Book your tickets at your nearest Rajhans Cinemas and enjoy extravaganza which will be brought by the students of this year !