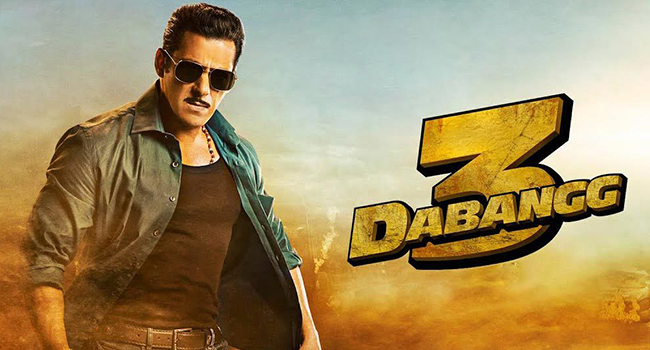 Salman Khan is undoubtedly one of the most popular Bollywood actors. The Dabangg superstar has been winning the hearts of the fans for more than two decades. In his 50s, he can still  make anyone go weak on their knees with his charming personality and killer looks.

For quite a many decades, the moviegoers were used to seeing serious policewalas on screen, but Chulbul Pandey changed it all with his chulbul antics in the 2010 film Dabangg. If his shades slung over the back collar were proof of his style statement, his witty one-liners made him the perfect wisecracker hero. And finally, Bollywood’s notorious policeman Chulbul Pandey is set to return with upcoming Dabangg 3.

In about four days,  the much-awaited movie of the year Dabangg 3 will hit the cinema halls across India and abroad. The Salman Khan starrer has been grabbing eyeballs ever since its announcement. The film also stars Sonakshi Sinha and Saiee Manjrekar, who is debuting into Bollywood with the film.

The surprise packages of this movie are debutant Saiee Manjrekar who is the daughter of Mahesh Manjrekar and of course, South superstar Kichcha Sudeep who plays the antagonist. With Kichcha’s presence, the wave of Dabangg 3 has already rocked the southern parts of India.

This movie is a prequel to the Dabangg franchise. After watching the trailer, it is obvious that this film is going to take us in flashback where it will be interesting to see how a happy-go-lucky young guy becomes Dabang.

According to source, Dabangg 3 is high on action-packed scenes, because the villain is difficult to handle,as well. Apart from these, there are lovely songs in this movie like Kye Karke and Munna Badnam Hua. The dialogues in the trailer have already being loved by the movie buffs, too.

In short, Salman Khan’s Dabangg 3 may have all the ingredients for a successful film — item song, engrossing dialogues, a south antagonist Kichcha. Yet, it is going to be a string story line that will hold movie-goers in theatres.

Not only the shirt which will be taken off, this time Salman will let loose his pants as well, so just stay tuned to the rest of the awesome filmy extravaganza on December 20th.

Book your tickets at your nearest Rajhans Cinemas and be ready to welcome Chulbul Pandey in this festive season.