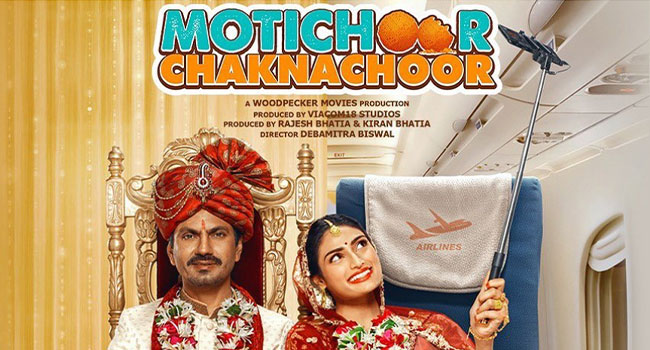 With time and again,Nawazuddin Siddiqui has proven his acting prowess with roles that go beyond the boundary. Now, the actor will be seen in a totally different genre, playing the lead role in a romantic-comedy ‘Motichoor Chaknachoor’. Athiya Shetty will be sharing the screen space alongside Nawazuddin in the film helmed by debutant director Debamitra Hassan.

The trailer is in itself a joyful ride of quirky comedy. The fans have really loved the chemistry between the on-screen couple. The movie showcases Nawazuddin Siddiqui as a Dubai-return aging guy in his forties who is desperately trying his best to marry any girl following many failed attempts.

His character Pushpinder finally marries his neighbour Annie (Athiya Shetty), a quite younger yet taller bride, who agrees to marry him only because she could make her dream come true to travel aboard. Following is how their life turns upside down when Annie realizes that Pushpinder had lied about his job and how the mismatched pair finds love later in their life.

‘Motichoor Chaknachoor’was shot entirely in Bhopal and got its title from the fact that motichoor laddoos are generally served at weddings. After failing to make a noticeable debut with ‘Hero’ and then a slow run at the box office with ‘Mubarakan’, this will be the third film of Athiya Shetty.

Both Nawazuddin and Athiya Shetty went through extensive language and accent training to play the typical roles. The film also features Vibha Chibber, Vivek Mishra, Navni Parihar, Sanjeev Vats, Karuna Pandey, Abhishek Rawat, Usha Nagar and Sapna Sand.
The film will hit the screens on November 15. Get ready for a fun ride and of course, yet another master stroke from Nawazuddin.