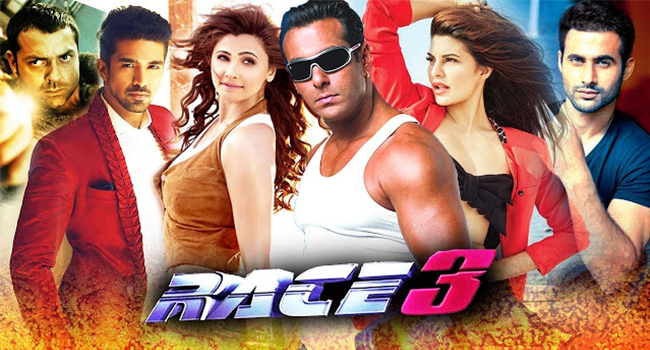 In the last couple of years, one of the best thrillers in Bollywood was ‘Race’. The movie with its intriguing plot twists grabbed the attention of the people and that’s why the makers decided to make it a franchise with ‘Race 2’ in 2013. Now the third and the most-highly anticipated instalment of ‘Race’ is all set to hit the theaters, the race-fans are eagerly waiting for the most enthralling race to begin. Interestingly, ‘Race 3’ has a whole new ensemble cast with a couple of exception! Believe it or not! ‘Race 3’ is going to be more exciting which will send the moviegoers into a trance!

There is absolutely no denying that the ‘Race 3’ trailer has already upped the eagerness quotient among the viewers. The action sequences and high-octane scenes have left the fans in a state of wonder. Along with Salman Khan, Remo D’Souza’s Race 3 also features bevy of stars including Bobby, Jacqueline, Freddy, Saqib and Daisy in pivotal roles. And with such unique combination of cast, ‘Race 3’ is going to be much more interesting to watch.

According to reports, when Remo D’Souza was asked regarding Salman Khan’s introduction and action-packed scenes, he said that he wanted Dabangg star to represent in a larger than life image which would mark his presence in a never-before-seen avatar. Moreover, Remo D’Souza also made it clear that Salman clearly denied to make use of a body double and decided to perform almost all the stunts by himself. To our surprise, right from the bike riding to car chase scenes to bare knuckle combat and gunshots, all of them were skillfully performed by Salman Khan himlself. And beyond, doubt, this movie is going to be an exciting visual treat to the audiences.

When it comes to ‘ Race 3’ story, the one word that suffices its standard is ‘intriguing’. This movie is a long-standing story of a family which deals in borderline crime but is rather vengeful and ruthless to the core. Their world is laden with a whole lot of twists and turns everywhere which will surprise the audience with their ultimate unpredictability. When Anil Kapoor ( Shamsher) saddles Salman Khan ( Sikandar) with a high stakes heist together with family support, what would go contrary? Every character seems unpredictable and nothing is as it seems! The high octane climax, vengeance and betrayals will leave the audience pondering over what would be the next?

Add to more, a romantic track featuring Jacqueline, Salman and Bobby titled ‘Selfish’ got good response. But stay tuned for more moves in this movie!

Scheduled to release on June 15, get ready for a blockbuster and what Salman has to offer on Eid to his fans, worldwide!