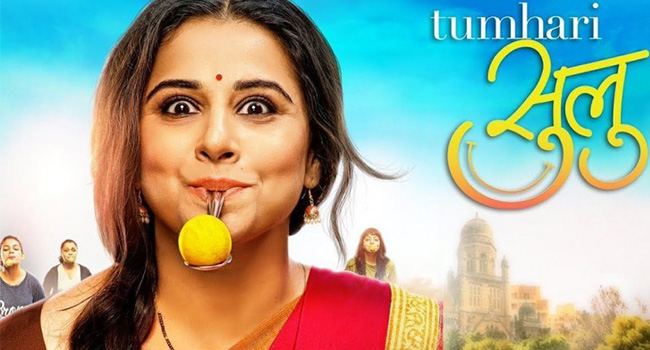 Bollywood’s much-loved Begum Jaan wears a versatile persona who has truly made it clear that beauty can’t be boxed and it’s certainly not at all about hourglass figure or layers of makeup. In fact, she claims to be pretty in her own natural skin. The craze for shedding on pounds also didn’t overtake her fame. Yes! She did it fantastically being herself and emerged as a better actress each time. From ‘No One Killed Jessica’, to The Dirty Picture and Kahaani, Vidya Balan has won over many hearts and accolades.

And now, it’s time to behold Vidya in a gripping story of Sulu. The promos and songs have already grabbed the attention of audiences with much expectation from Vidya. With Vidya Balan in a lead role, the movie also features Neha Dhupia who will be essaying the role of Vidya’s boss at a leading radio station. The role of Vidya’s on-screen hubby will be played by Manav Kaul. Interestingly, this movie will also feature RJ Mallishka who has trained Vidya Balan for her role in ‘Lage Raho Munna Bhai’.

‘Tumhari Sulu’ is a comical slice-of-life wherein Vidya plays a beautiful and hard-woring housewife. Suddenly, there comes a surprising turn in her life by becoming a night Radio Jockey which in turn transforms her routine life. After her successful performance as RJ in ’Lage Raho Munna Bhai’, the audience will get to see her once again winning million hearts with her sweet voice and extraordinary presence of mind.

Recently, this movie was much in talks for having received U certificate from the Central Board Of Film Certification. ‘Tumhari Sulu’ was to release on 1st December but just to avoid the clash with Padmavati, it is scheduled to release on November 24, 2017.

Book your tickets in advance at your nearest Rajhans Cinemas and spend a time with a restless go-getter housewife who yearns to do more. Beyond a doubt, with a great sense of humour and fun, Sulu will surely make your day!