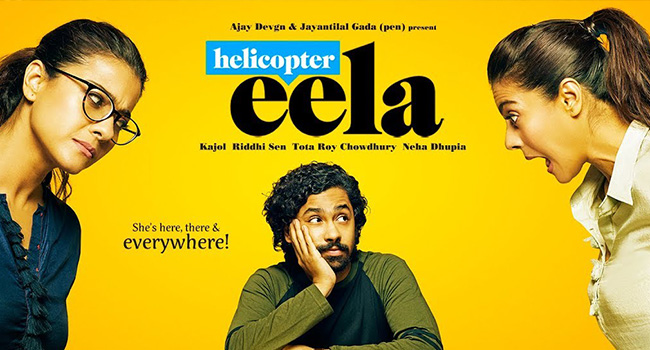 Kajol Devgan, whom we saw in ‘VIP 2’ last time, is now all set to make a dazzling comeback with her unique movie ‘Helicopter Eela’. In fact, the trailer of this movie has received enormous response from the audience for its one-of-the-kind concept. Moreover, Tota Roy Chowdhary from the film ‘Indu Sarkar’ fame, essays the role of Kajol’s husband herein. According to sources, Tota Roy wished to improve his diction for the movie and thankfully Kajol help him immensely as she being a multi-linguist.

According to reports, when Mr. Tota Roy came up with issues with regard to mouthing Hindi dialogues, Kajol came to his rescue immediately to his surprise. Besides, she went an extra mile and made the actor rehearse the scenes perfectly before the final shots. Such practice did leave no stone unturned from dialogue delivery to overall direction.

Interestingly, this movie is based on the Gujarati play ‘Beta Kaagdo’, written by Anand Gandhi. Helicopter Eela is all about Eela (Kajol), a single mother yet an aspiring singer. The movie will become more interesting to watch when Eela joins her son’s college to complete her studies. So, this situation wherein mother sets off to accompany her son in the same college will bring with it lots of fun and laughter. Naturally, the relationship between a single parent and her child is always deeper. There will be co-dependency between them as they know that there’s no third person in their relationship dynamic. Thus, there is going to be an adorable rapport between the duo.

Kajol has definately carved out a niche in Bollywood and has acted in iconic films including Kuch Kuch Hota Hai, Dilwale Dulhaniya Le Jayenge, Pyaar Kiya To Darna Kya, Fanaa and My Name Is Khan. Thus, there is no denying that she will give her best performance once again in this uniquely-themed movie.
Directed by Pradeep Sarkar, and produced by Ajay Devgn, Dhaval Jayantilal Gada, Akshay Jayantilal Gada ‘Helicopter Eela’ releases on October 12. Book your tickets at your nearest Rajhans Cinemas and enjoy this movie with your loved ones.