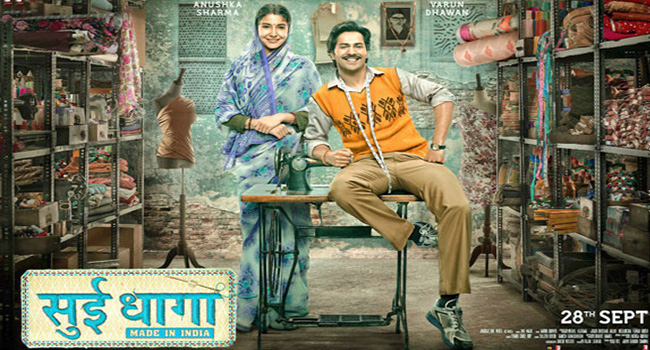 Nowadays, Bollywood seems to be advancing through content-driven movies. With quite a many hit releases on public awareness and biographies, here’s another movie starring Varun Dhavan and Anushka Sharma. The duo actors will be working together for the first time in this new project. However, the first choice for this movie was Ranbir Kapoor but following initial discussion with the actor, the movie was later bagged by Varun Dhavan.
For this project, both actors have gone the distance by going deglamorised. Yes! the duo have carved out niche by blending their characters into completely ordinary middle-class-looking folks. Interestingly, the truth is that even Anushka has risen above from humble background and now she is working her best to transform herself into the character of Sui Dhaga.
According to sources, the movie is based on the Make in India campaign launched by the Government of India which was aimed at encouraging Indian entrepreneurs and industries to manufacture their products in India and also increase their investment. Interestingly, this movie will focus upon a story which ultimately sheds light upon India’s indigenous textile industry.
This movie is about finding love and respect ! It’s an interesting story which celebrates the unique spirit of self-reliance. Anushka plays the role of an embroiderer, while Varun Dhavan plays the role of a tailor. An unemployed protagonist Varun from small village will be seen defying all odds and starting his own garment business.
For the first time ever, Sui Dhaga’s logo is made by artisans from across India. The team of this film reached out to local craftsmen and artisans from across the length and breadth of the nation to create the logo in their unique stitching styles, which surely is an innovative idea.
Sharat Katariya has directed this movie who was also roped in earlier for romcom Dum Laga Ke Haisha (2015). Maneesh Sharma has produced this movie who had also worked with Anushka in Ladies vs Ricky Bahl and Band Baaja Baaraat.
Released today, book your tickets at your nearest Rajhans Cinemas and enjoy an impeccable venture of a middle-class guy.