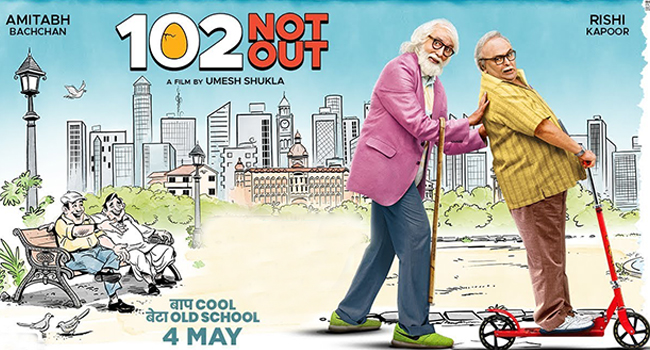 In a time when Khans are shining and young generation of actors are making their mark, there are a few veterans actors who are still ruling the roost. Two of them undoubtedly are, Amitabh Bachchan and Rishi Kapoor.

In a time when not almost all movies can be seen with family, 102 Not Out comes out as clean entertainers which can be enjoyed with entire family. Directed by Umesh Shukla, 102 Not Out, promises to be a lovely laughter dose while warming one’s heart at the same time. After all, the duo brillant actors will not leave any stone unturned when it comes to appease thier audience!

The story revolves around a strange father-son duo, Dattatreya and Babulal, essayed by Amitabh Bachchan and Rishi Kapoor, is a slice-of-life comedy drama with a whole lot of fun. Alongside their age, what makes Babulal and Dattatreya stand out is their irreconcilable outlook towards life. At 102, Dattatreya (Amitabh Bachchan) wants to break the record of the oldest man alive on earth — a 118-year-old Chinese —while his Rip-Van-Winkle, 75-year-old son has resigned to a life of drudgery and boredom.

Based on a well-known Gujarati play of the same name, 102 Not Out will present craziest parent-son duo with ultimate plot. In fact, director Umesh Shukla once said that he was producing the play ‘102 Not Out’ for almost 6 years after which he realised that the movie based on such a play will have universal appeal. According to the filmmaker the movie will stay true to the novel and will also predominantly depict Gujarati setting.

Slated to release on May 4th, 102 Not Out will surely create buzz on silver screen. Book your tickets at your nearest Rajhans Cinemas and enjoy remarkable father-son performance!