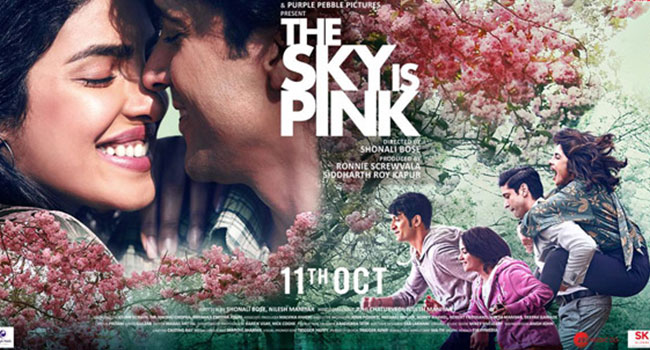 The trailer of Farhan Akhtar and Priyanka Chopra’s ‘The Sky Is Pink,’ looks so promising. The movie which also stars Zaira Wasim (a Secret Superstar actress) in a lead role, portrays an emotional story of a girl who is suffering from pulmonary fibrosis. In this movie, Zaira essays the role of a teenage girl who tells the story of her parents spanning 25 years; played by Priyanka and Farhan. Surprisingly, this film is based on the life of a motivational speaker Aisha Chaudhary.

The long story will be coyly narrated by their daughter, Aisha (Zaira), who makes it clear from the beginning that she’s speaking from beyond the grave, but “it’s no big deal.” There seems no self-pity in her voice as she affectionately tells her life story and depicts her family’s motives and feelings. Rather she is seen calling her mother, Aditi “Moose” (Priyanka Chopra) and her father, Niren (a hyper-responsible Farhan Akhtar), as “Panda.” The duo make an inter-caste love marriage that, though disdained by society, binds them closely together.

Zaira will be seen as a sassy, sarcastic, determined and also at-peace girl. She will be the presenter who coolly describes the situations. So, there will be so much humor, warmth and heart-touching tales which will drive the spectator to enjoy each phase of a family-story which is based on a true story as mentioned earlier.

‘The Sky Is Pink’ had its world premiere at TIFF (Toronto International Film Festival), where it received a remarkable four-minute long standing ovation. Moreover, this will mark Dangal actress Zaira’s last movie as she has announced that she will be quitting Bollywood as it was barging into her own paths of ‘Imaan’ and her connectedness with her religion.

Scheduled to release on 11th October, book your tickets at your nearest Rajhans Cinemas and check out the return of Priyanka Chopra after a break of three years from Bollywood in this highly-acclaimed movie.